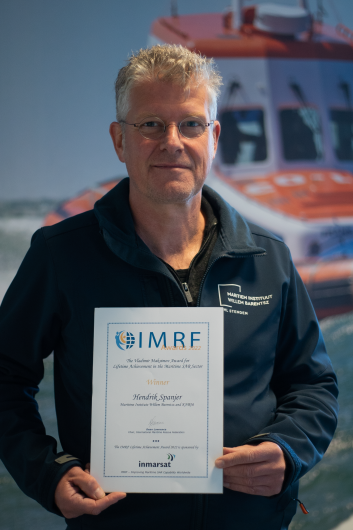 The winner of this IMRF award has been selected from several nominated persons by a professional jury of the International Maritime Rescue Federation (IMRF).

From his professional role as lecturer at the MIWB he is involved for many years in the courses: Maritime Radio Communication (GOC and ROC), in the national maritime radio communication examination committee and in the STCW safety and survival courses. Besides these tasks he was also actively involved in several EU-projects to make safety information easier available for a wider group of users to enhance safety at sea.

Besides his professional job as lecturer at the MIWB, Henk is for 25 years active as volunteer on the Royal Dutch Lifeboat Institution (KNRM) at lifeboat station Paal 8 Terschelling the Netherlands. Henk handed over the operational command as a coxswain of the lifeboat station to Peter Terpstra on the first of October this year. Henk will remain to be active on his station as a deputy of Peter for a couple of years.

The nomination for this personal IMRF-award came as a surprise to Henk. He feels honored by this nomination, and he’s feeling proud about the fact that he has been elected by the IMRF jury as a winner for this award.

A remarkable fact is that KNRM lifeboat Station Paal 8 Terschelling the Netherlands was in 2018 the winner of the IMRF Team award For Outstanding Team Contribution to Maritime SAR Operations, Henk was the coxswain during the two actions the station was recognized to receive rewarded for by the IMRF.